Are My Mezuzos and Tefillin Mehudar? 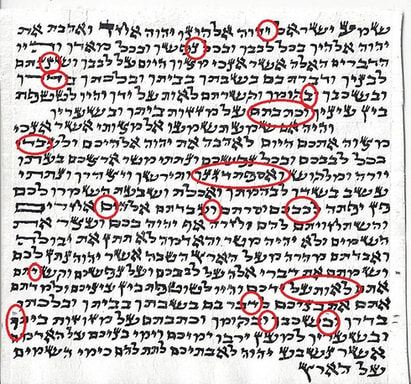 Typical cheap Mezuzah that can be found in Judaica stores and gift shops around the world (Not sold at the Sofer Center)
When it comes to purchasing Mezuzos and Tefillin it is important to realize, that like everything in this world the more you pay the more you get and vise versa. It takes a properly trained competent Sofer many hours to write a Mehudar Mezuzah and Tefillin, so as you can imagine  if you see a Mezuzah being sold for thirty dollars alarm bells should go off in your head!!

Mezuzos for $30 or Tefillin for $200 the Mezuzah was written in one hour and the Tefillin in a few more, the person writing it could not care less if this Mezuzah or Tefillin ended up being Kosher or not, it is written so quick and carelessly that many many issues are found in these Mezuzos (See Image on the right) issues most common are:  Letters, Words or/and Tagim that are Missing, Extra, Substituted, Touching, Broken. Improperly Spaced and Deformed.
Not only are these Mezuzos and Tefillin not Mehudar (Beautifying the Mitzvah) or Kosher Lechatchila (A preferred status) they are at best Kosher Bedieved (minimally Kosher) and very often out right Possul.

Someone who can write like that and either does not care or does not know any better you can be sure is not certified  and definitely not qualified to write Mezuzos or Tefillin. We can not trust  that they know or follow the laws in Shulchan Aruch in regards to writing Mezuzos and Tefillin and we can not rely that what  they write are Kosher (Not all errors are detectable by the eye after they are written, for more info on this follow Link).
​
In most cases Mezuzos and Tefillin like this come from Israel and it is a known fact that they are either being written by Arabs or non religious Israelis and Students looking to make a few extra dollars in their spare time. 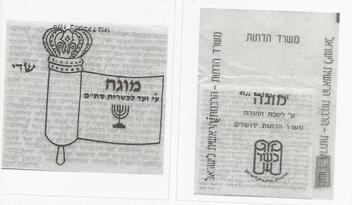 An authentic looking seal is unfortunately not enough
In the early 1980’s the Judaica market was flooded with cheap Mezuzas that came sealed in packages endorsed by the Israeli Rabbinate.
An investigation was made and it was discovered that the Israeli Rabbinate did not endorse these Mezuzos and in fact many were written by non religious Jews, women, and non Jews or collected from old posul Mezuzos awaiting burial.
​
The Chief Rabbinate informed the public not to use such Mezuzos and that the endorsement was null and void. Unfortunately  these Mezuzos are still around and still being produced today.

​That is why it is important to purchase from someone you can trust that his Mezuzos and Tefillin come from a Kosher source even if it costs more.

What are Mehudar Mezuzos and Tefillin? 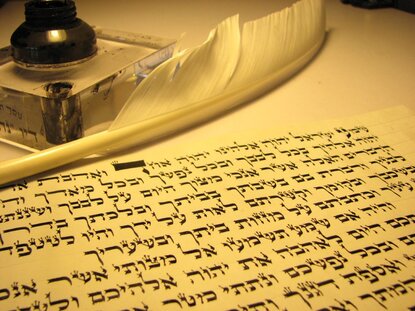 Mehudar Mezuzah
A nice Mehudar Mezuzah can take a Sofer anywhere between four and five hours to write. and Tefillin can take as long as 35 hours. Before he writes he makes sure to immerse in a Mikvah. When he writes he makes sure to say the letters and words to infuse them with the Kedusha of the Torah.
He checks each line over before writing the next, He cares about the end product. He takes pride in his work, in a sense like an artist takes pride in his painting, but even more so the mere thought of a letter being written incorrectly horrifies him.
A Sofer who is a Yirei Shomaim wants his Mezuzos to draw down Hashem's Kedusha/Holiness in to this world, and he is honored to be able to be the vessel in which it comes about. He is not primarily writing for financial benefit.
As you can imagine because so much time and effort is vested into  nice Mehudar Mezuzah they can easily cost one hundred and fifty dollars, while some can reach as far as two hundred and fifty.

The more Mehudar it is the more it will cost.
Mehudar means two things:

A) Aesthetic beauty, the Torah says “ze keli vi anveihu” which translates to “this is my G-D and I will glorify him” we learn from here that it is proper to adorn the mitzvos, that our observance of the mitzvos be a beautiful as possible. In our terms here it refers to a beautiful Ksav.

B) More importantly it is referring to the Halachik aspect, to fulfill the Mitzvah on the strictest level. A level that every Halachik authority would agree  is Lechatchila and that it is the most kosher it could be.

But remember just because a Mezuzah is not Mehudar does not mean it is not Kosher. There are several factors that make a Mezuzah Mehudar. The more they have the more Mehudar they are to name just a few;

1) Beautiful Ksav. Simply it means that the letters are beautiful, their length and height are symmetrical, and the Sofer followed closely the intended Ksav and did not veer off.

2) That the letters are formed properly and that there never was any doubt over the form of any of the letters.

4) No questionable spacing, the words and letters need to be spaced properly and evenly as to assure which letters belong to which word.

5) The letters have the crowns written on the letters as the letters are formed. In many  cheaper Mezuzos the words are first written, and then later someone else adds the crowns afterwards.(there are opinions that say they need to be formed as part of the letter.)

6) All the letters that need, have additional crowns as specified according to Kabbalah.

7) According to Halacha the letter Lamed has two crowns/tagim. Kabbalah explains that the tag on the right side corresponds to kindness, and the one on the left, to severity. Consequently, it is of utmost importance that the right tag be taller than the left one, ultimately drawing down kindness from Above.